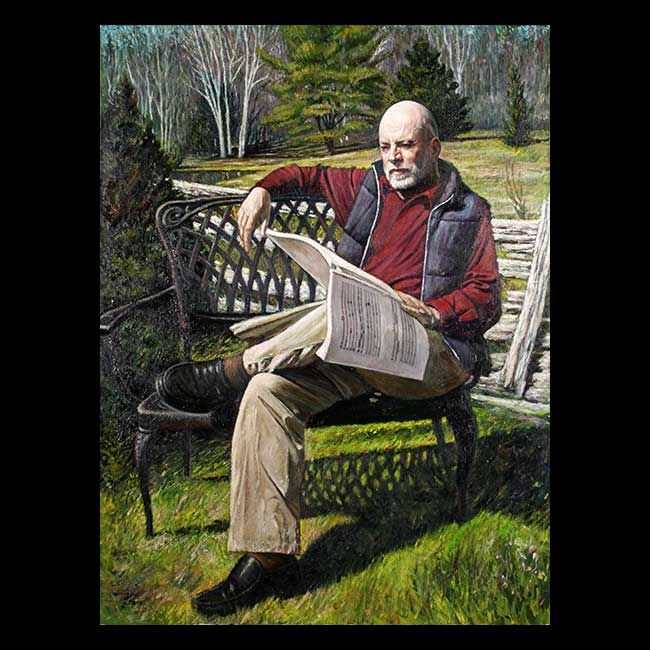 Often called a “Renaissance Man”, Zinour Fathoullin has achieved excellence in both fine art and dance. “I am particularly inspired by people who are simple, generous of spirit and intellectually complex. When I paint a subject with whom I share a common understanding of this delicate life balance, their portrait simply flows out of me as though I am a conduit of their essence”.

Christos and I initially connected in 1999 through our common love and respect for the Inuit culture. I was in the midst of choreographing pieces for an upcoming tour of my Inuit dance company entitled “Sikumiut (People of the Ice) ”. While vacationing in Nova Scotia with my family, we visited James and Alma Houston’s Art Gallery in Lunenburg and Christos’ music was playing in the background. It immediately caught my attention and, on a whim, I called him at his home in Toronto. We spoke and he gave me permission to use his music for the pieces I was creating. Thus began a relationship that was not cemented by a face-to-face meeting until this spring when Christos generously agreed to sit for me as a subject for this portrait in his country home in Uxbridge, Ontario. The characteristic most evident during our time together was his uncanny ability to be both in the moment with you while at the same time being “somewhere else” in his own world, creating music. This is the expression captured in the portrait.

“Two time Juno Award winner Christos Hatzis is currently enjoying a growing international reputation as one of the most important composers writing today” (CBC Records). Since 1983, Christos has had in excess of 92 national and international commissions as well as being awarded the 1998 Jean A. Chalmers National Music Award for the Canadian Classical Composition of the Year and the 2008 Jan V. Matejcek Concert Music Award from SOCAN. Christos is an “advocate of borderless culture” – a sentiment many consider a cornerstone of Canadian culture and identity.

Born and educated in the former Soviet Union (Russia), Zinour Fathoullin is classically trained in art and dance. After graduating from art college in 1979 with a degree in fine art, he was promptly hired by the government as an artist. His installations include graphic works for State advertisements, metal and wood reliefs, mosaics, stained glass compositions and oil portraits.

Since moving to Canada in 1990, Zinour established a dance school in Shelburne, Ontario and an internationally acclaimed dance company (Sikumiut) in Nunavut. While living in Nunavut from 1996 to 2001, Zinour taught art and dance for Nunavut Arctic College’s Teacher Education Program. Successful exhibitions of his paintings, sculptures and portraits have been held in Russia, the Ukraine, Greenland, Alaska, Belgium, France, New York, Nunavut, Toronto and Calgary. Commissioned works are currently installed in the Nunavut Legislature (Series of oil on canvas images of Circumpolar Inuit), the Premier of Nunavut’s Office, Ravenwood Oil and Gas, ENG Environmental Solutions, the Calgary Board of Education and various private collections. Zinour has been awarded grants from the Northwest Territories and Nunavut Art Councils, the Alberta Foundation for the Arts as well as the Canada Arts Council. Dance commissions include collaborations with Susan Aglukark and Paul Brandt.

Since moving to Calgary, Zinour has continued to work with marginalised youth in Calgary schools and the Calgary Young Offender’s Centre as an artist-in-residence. Collaborative creations include dance compositions of all genres, totem poles, self-portraits, drums and large papier mache sculptures. “ In his portraits of the Elders of Nunavut, he depicts the human landscape with brushwork that is complex but with an equipoise and form which reveals the simplicity he reveres”. (Kit Bennett, Craft Arts International No. 63, 2004)