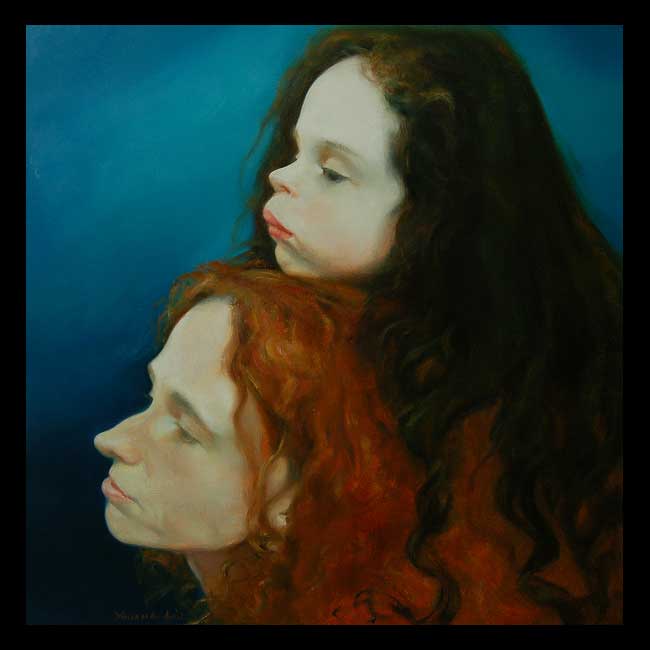 Hair by hair – I met Aniko the first time and was attracted by her free red curly hair. Then I saw her little daughter Jaimie, who was overwhelmingly covered by long curly hair like water flowing over Niagara Falls. What hair! What freedom! I enjoy watching the mother and daughter’s every movement while their hair blends together. It was their hair that intrigues me to study their faces.

Yousha’s professional experience began as an assistant curator at the Art Center of Hunan Province (1982-1985), followed by a position as assistant professor at the Zhejiang Academy of Painting in China (1985-1991). After her first solo show in Canada, Yousha relocated to Toronto and continued her creative life as an artist and art teacher (1991-1999). She taught studio art at Georgia Southern University (1999-2002), Iowa State University in USA (2002-2004), and gave private lessons in Canada.

As a life long artist, Yousha has had numerous solo and group exhibitions internationally.

Some of her notable exhibitions include: the Sixth National Art Exhibition of China at Beijing where she won the Bronze Medal (1984); the “Beyond the Open Door” Chinese Art tour in Los Angeles, San Francisco and Huston (1986); the “New Artist and New Work” – solo exhibition at the National Art Museum of China (1988); the “Image 98” – 124th Annual Open Juried Exhibition of the Ontario Society of Artists in Toronto (1998); solo exhibition at Gallery Arcturus in Toronto (1999); and the Kingston Prize for Contemporary Canadian Portraiture (2005); 29th Annual Juried Show of Fine Arts, Mississauga Art Gallery (2006).

Her work has been collected by private and public collectors worldwide, including the National Art Museum of China, the History Museum of Revolution of China, Foundation for the Study of Objective Art in Toronto, Georgia Southern University, and the City of Statesboro in Georgia, USA