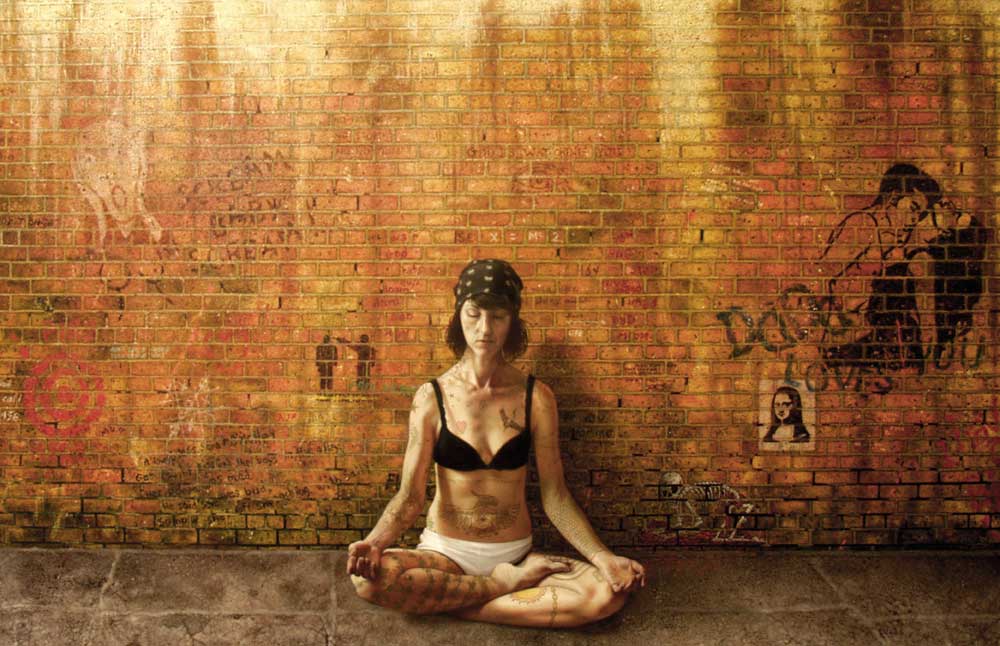 The initiative for this portrait painting began as an idea dream. The impression was vague, however I could make out a massive, immoveable, background structure, blocking out the sky. I didn’t know its material, but knew it was full of graffiti. The words, scribbles, posters and other visuals on it were somewhat obscure. There was someone in front of this great wall, yet I did not know if this person was male or female, young or old, standing or sitting, but saw that he/she was covered with symbolic markings. This flash idea image stayed in my thoughts, not knowing how to proceed with it, until one day, when I met a young woman whose body was tattooed from head to toe. As a complete stranger and never having posed for an artist before, she hesitatingly but willingly accepted my invitation when I told her of this dream. A few days later in my studio, after I had set up a large piece of cardboard to be the imaginary barrier, she began to strike many poses. As some time passed, however, I became disillusioned that I could not ‘see’ what I had envisioned months before. It was during the first rest break that I asked her what her body decorations meant. Immediately, she went into a childish stance (feet, pigeon-toed with hands behind her back, head down), and relayed a dark, tortured past of mental and physical abuse. “My body was taken away from me”, she quietly said. “I get a new tattoo every time my thoughts go back there. They protect me”. Sensing her pain, I immediately saw the massive wall reappear before me. I now knew its significance. It represented everything psychologically menacing to someone like her. It was then that the figure from the dream emerged. I asked my model if she meditated at all, and she went directly into a lotus position with her back against the make-shift backdrop. She instantly became relaxed and inwardly focused. Her armour of tattoos were protecting her from her surrounding darkness. I had my painting.