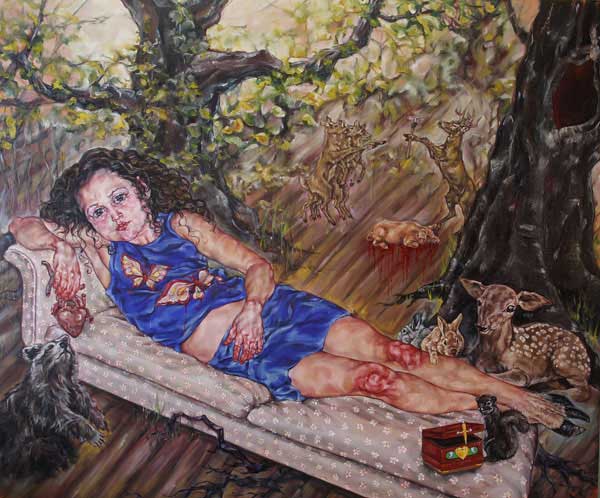 My work is rooted in figurative painting and is driven by my interest in examining humanity.  I strive to capture the psychological and emotional spaces that exist at the borders of what cannot be spoken and are intrinsic to human experience.

Many of the issues that influence the human condition are present in my practice:  identity, sexuality, power relations, the allure and fear of the forbidden, consumption, the assumption of privilege, and the meaning and value of ‘self’ and ‘other’.  Underlying this is an interest in the relationship between social conformism and autonomy, greed and sacrifice, the fictional and the real, civilization and the natural world.

I paint and draw intuitively to give me the freedom of discovery.  I use diverse techniques on the surface to impart a sense of physical presence and tactility.  I want the flesh I create to divulge hints of mental or physical states and for the tension between the figure and the environment to cause conflicting emotions, making the work persist between shadow and light, tragedy and satire, falsehood and truth.

Above all, my practice is influenced by my own experiences within our global simultaneity, an intense inner world and life, my need to translate that somehow and relate it to the small, individual universes others carry with them, and ultimately to navigate our world.