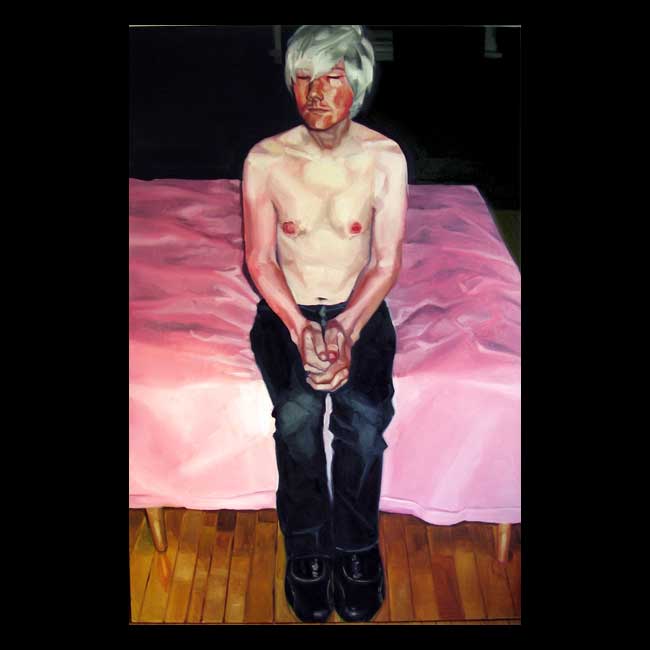 The working title of my current series of paintings is An Opera for Drella (after Lou Reed’s Songs for Drella). It is based on a bit of gossip that I came across in a Warhol biography: that Warhol wanted to befriend Jasper Johns and Robert Rauschenberg (who were dating at the time), but Johns and Rauschenberg would have none of it, fearing that proximity to Warhol’s swishiness would reveal their homosexuality. I have created an opera out of this, a cycle of narrative paintings whose story of unrequited love unfolds as a series of tableaux and vignettes.

As with all of my paintings, I have cast my friends in all the roles, thus continuing my obsession with projecting my immediate circumstances and community onto larger events. This particular painting is intended as a kind of Dramatis Persona; it is part of a series of 3 portraits of the main characters of my opera: Drella, Jasper, and Bobby. These portraits are intended both as an introduction to the main players, and as a visual exploration of how I perceive and have constructed their characters. Each of the portraits borrows heavily from other work. In this case, it is inspired Alice Neel’s portrait of Andy Warhol.

M.F.A. in Visual Arts, York University (Toronto), 2006. Dissertation title: Songs of My Suse, or The Unbearable Wayne-ness of Being: An Opera in Three Acts, nominated for Thesis Prize.
B.F.A. in Painting and Drawing, Minor Art History, Concordia University (Montreal), 2001 (Graduated with Distinction).

2007 illustrator, “The Astounding Adventures of Strongman and Quickboy,” dir. Peter Kingstone, screening at the Inside Out Film Festival, Toronto.

2006 “Notes on Glad Day,” published as part of the catalogue to “(Mary Mary) Are These the Hands that Cut?” a programme of videos presented at MoCCA by the Pleasure Dome Collective.