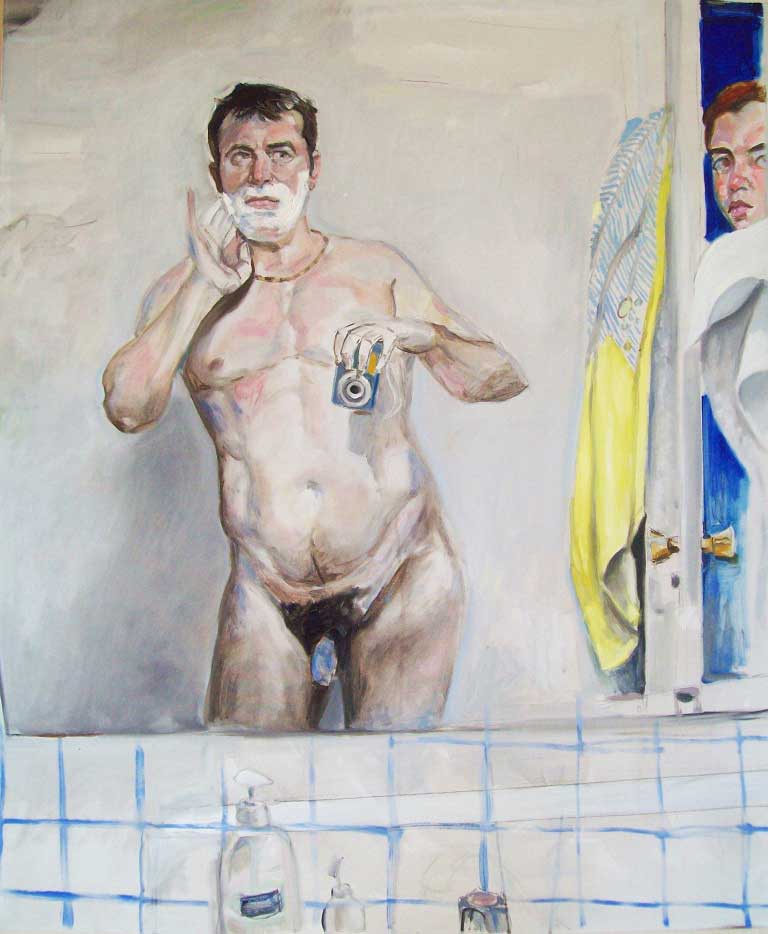 I submit my painting titled “Self-nude with J.J”, oil on canvas, 2009 in application for the Kingston Portrait Award. The work continues my inquiry of the portrait as a mirror of identity. The portrait of my wife in the role of the voyeur reverses the art historical canon of the nude subject, at the same time as it challenges notions of the male and female gaze. For over half of my life, and for most of my professional career, I have explored the figure, the nude, in portraits of myself and of others. Twenty years ago while still living in Sarajevo, and only two years before the outbreak of a devastating ethnic war, I painted my first nude self-portrait. In rendering this oil on canvas I worked consciously against the traditions of the heroic or ideal nude. My self-portrait was a conceptual metaphor for the vulnerability and fragility of the artist, of an individual, when confronted with the premonition of violence and war. Now, twenty years later from the perspective of a man in his 50s, I revisit the imagery of the nude self-portrait. My new paintings are more introspective, with the figure cast as a vessel for an emotional state of being – fragility, weakness, humanness – not caught in the forefront of war, but in the inevitable passages of time.

Male self-nudes are not at all common subjects in the history of painting (notable exeptions are Van Dongen and Lucian Freud -1982 nude and a few drawings by Dürer). Reading recently about Bonnard’s late portraits I found that in 1920, the German critic Paul Westheim introduced a new category in art, naming it SELBST -KUNST(self-art). At the 1995 Venice biennial (themed Identity and Alterity) Jean Clair (who included Bonnard’s self-portraits in the show) wrote in his essay, “What if the 20 century had been more than any other, the century of the self-portrait, not of abstraction?” In this vein, I can call my work Self-nude art.