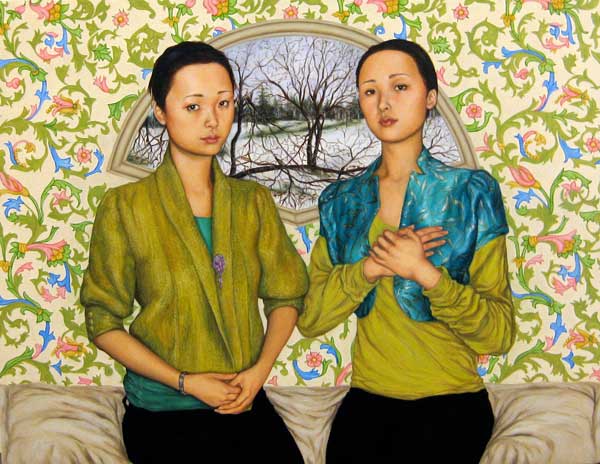 The Return Home was created after my return to Vancouver after living abroad in London, UK for three years. I had very mixed feelings about the return, as it was an abrupt and unplanned move home. I wanted to reflect this in the painting, which is a double self-portrait, by juxtaposing many elements within the image, creating a narrative with which the viewer must engage. My two selves are contradicting yet complimenting each other in their poses and demeanours, sitting indoors where the wallpaper is reminiscent of Florentine floral paper. Behind me is a Chinese fan shaped window, traditionally used in Chinese architecture to highlight the beauty of nature and frame the views as works of art. Outside is snowy with fallen trees, a scene from the park across from my home, as the winter that I returned to Vancouver, there was a giant snowstorm, which brought down many trees in the city. Drawing from my life as a Chinese-Canadian artist, a concept of duality runs through The Return Home, a theme that is often visited in my work.