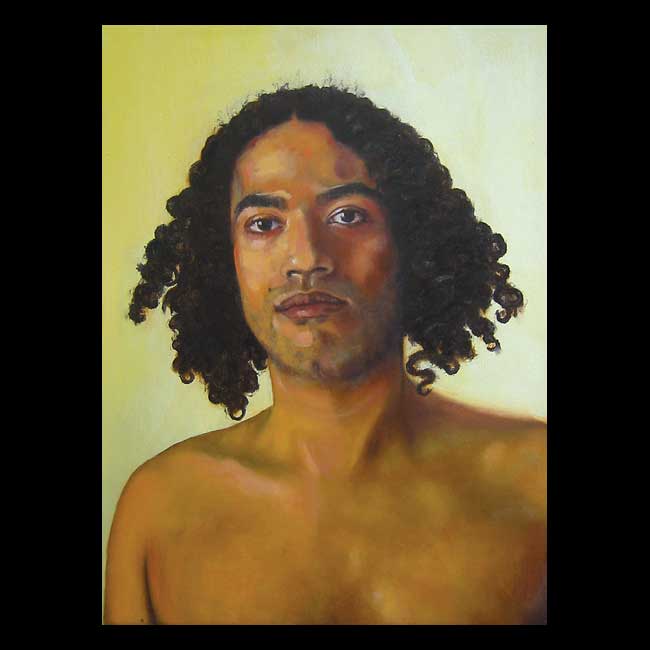 My interest in painting is in exploring the portrayal of the psychological character of the figure. The nuances of my subjects’ appearances are intrinsic to the range and subtleties of emotions that I translate through my paintings. Witnessing someone’s personal space and listening to what their eyes, the slope of their shoulders or the tension in their hands are revealing are the basis for a visual dialogue that I articulate through a language of colours.

The painting process is fundamental to my work: using oil paint, I vary and experiment with hues and tones, painting intuitively while using the depiction of a figure as an anchor in my composition. An image is constructed and revealed through the building up of a surface of colours and textures.

The quality of light that I strive to create in my paintings is both formal and introspective, as I aim to capture both a likeness of the subject as well as the intensity of their inward gaze. Through the layering of colours, my painting becomes an image trap, seizing the physical reality of the figure as well as the weight of their presence. Often using people that I know as my models, I try to render an observation of the essence of the individual’s psychological identity and to attune the viewer to a connectedness with the subject. With the use of prosaic subject matter, these portraits craft a reciprocal relationship between the painted subject and the viewer, by making the familiar (or the personal) universal. In this sense, I am exploring the non-verbal communication involved in the portrayal of a figure by distilling both physiological and emotional traits into a representation of the duality of privacy and observation.

1995 Dawson College Chairperson’s Prize – painting was chosen by the Fine Arts faculty and purchased for the College’s Permanent Collection, during the Fine Arts Graduation Exhibition