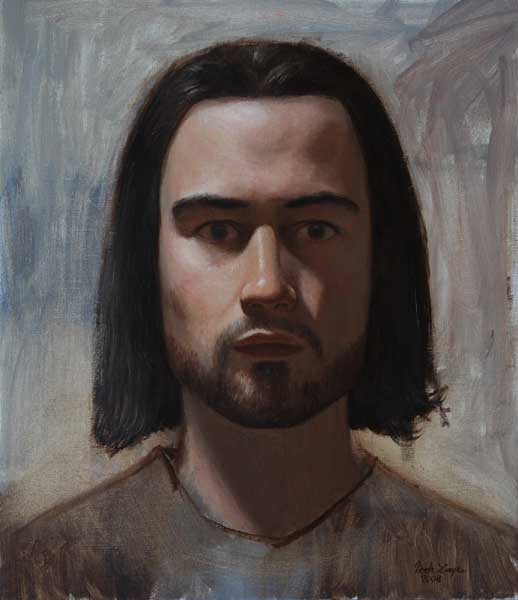 In my painting Self-portrait 08, I examined and challenged myself to look anew at how I view myself. Is this a painting of how I think or wish I looked or a painting of how I really look? I used the timeless style of traditional realism to portray my image. I set up a mirror in my studio and arranged my lights in a way that cast interesting shadows on my face yet still gave me enough light to see my painting as I painted it. I think Self-portrait 08 captures some of my confidence as well as unsure-ness about myself as a human creature on this world at this time.

Noah Layne (1979-) is a realist artist who works out of his studio in Victoria, BC, Canada.

Noah has been painting and drawing since he was very young. Noah was homeschooled as a child and encouraged to pursue his artistic goals. He has studied various painting techniques and been influenced by painters such as Bouguereau, Rembrandt, Sargent, Velazquez, and Wyeth.

Noah works in oil and is an excellent draftsman. He believes in the importance of working from life. His works are primarily concerned with portraying a realistic image through the use of light, line and color.

Noah Layne:
Has shown his work in galleries in Victoria, Vancouver, Los Angeles, San Antonio and Santa Fe.
Was the cover artist of Victoria’s Focus Magazine November 2005.
Was picked by Southwest Art Magazine in 2004 as one of 21 artists under 31 to collect now!

“I have known Noah for several years and have watched his development with much interest… He is a concentrated worker… And I wish him all the best for his good work and his exciting future.” Myfanwy Pavelic, Order of Canada, Order of BC, Official Portrait Painter of former Prime Minister Pierre Elliott Trudeau.