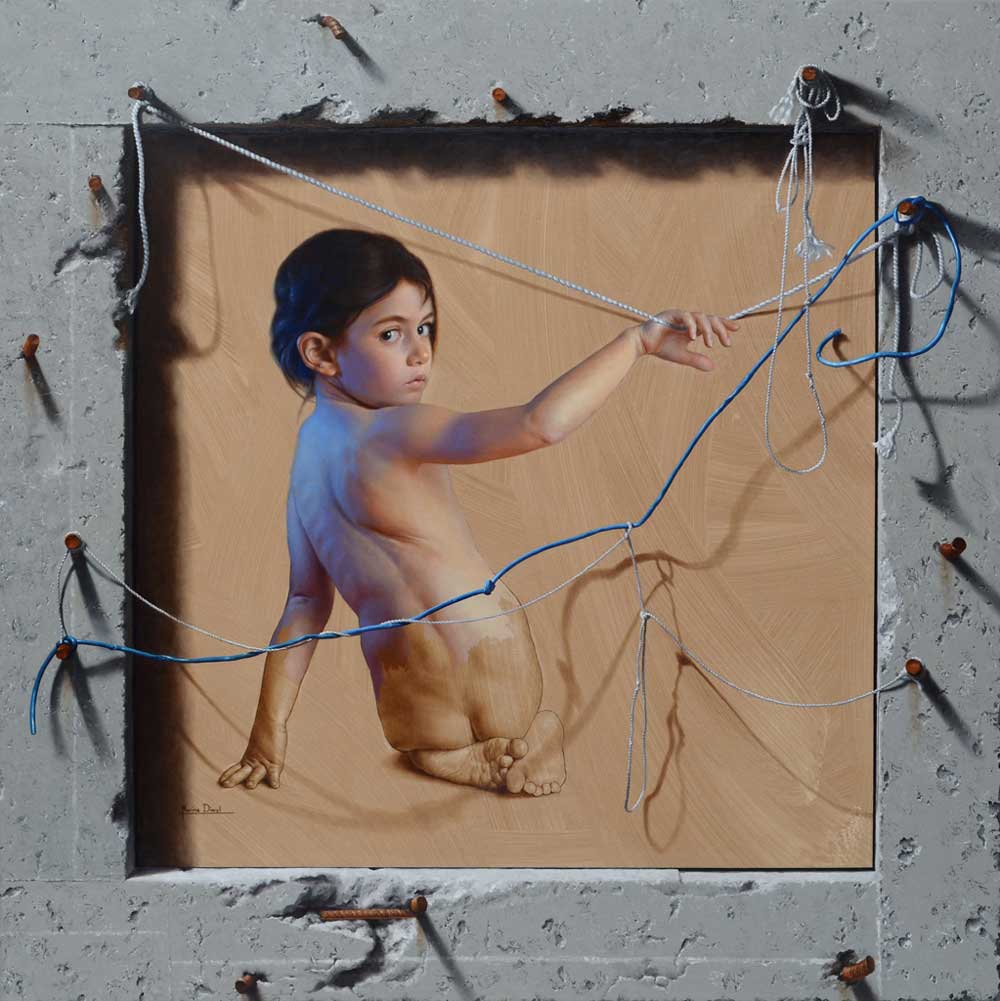 I’ve always been interested in figurative art. My major influence is the Italian Renaissance. My creativity expresses through constraints, and that’s why I love challenging subjects like trompe-l’oeil. I also love to represent figures because the human face is one of the most difficult things to paint. All my works begin with a strong concept that I develop to keep only the essential elements.

My goal is not only to paint a recognizable person, at a moment of her life, with her history, her psychological complexity, but also to paint this person as a human being in which everybody can recognize himself or herself. I tend to go beyond the simple representation to reach an allegory of humanity, using sometimes symbols to achieve this goal.

Recently, a predominant presence of babies and toddlers appeared. They are often forgotten in contemporary realism although they were very present in the paintings of the past centuries. I think they are fascinating human beings, who live fully strong emotions, and express them with a rich body language. In my latest works the union of my different interests (Trompe-l’oeil and Figure) occurred, opening a new door.

Marina Dieul was born in France. She showed great interest in painting and drawing from an early age, and her family encouraged her vocation. In early 2000, she moved to Montreal, Canada, where she now lives. She has since studied with Tim Stotz and Michelle Tully, former students of Ted Seth Jacobs. Her work has received numerous awards and honors, including the Kingston Prize, Salon International (Greenhouse Gallery), the Artist Magazine, and has been extensively profiled in International Artist Magazine, among others. “Stroke of Genius ” #2 and #3 (published by North Light Books) also features her work. Most recently she won the William Bouguereau Best of Show Award, and first place in the drawing category at the Art Renewal Center Salon, and the Best of Show in the “Inspiring Figures” exhibition (Butler Institute of American Art). She is a member of the Portrait Society of Canada, the Portrait Society of America, and the International Guild of Realism.