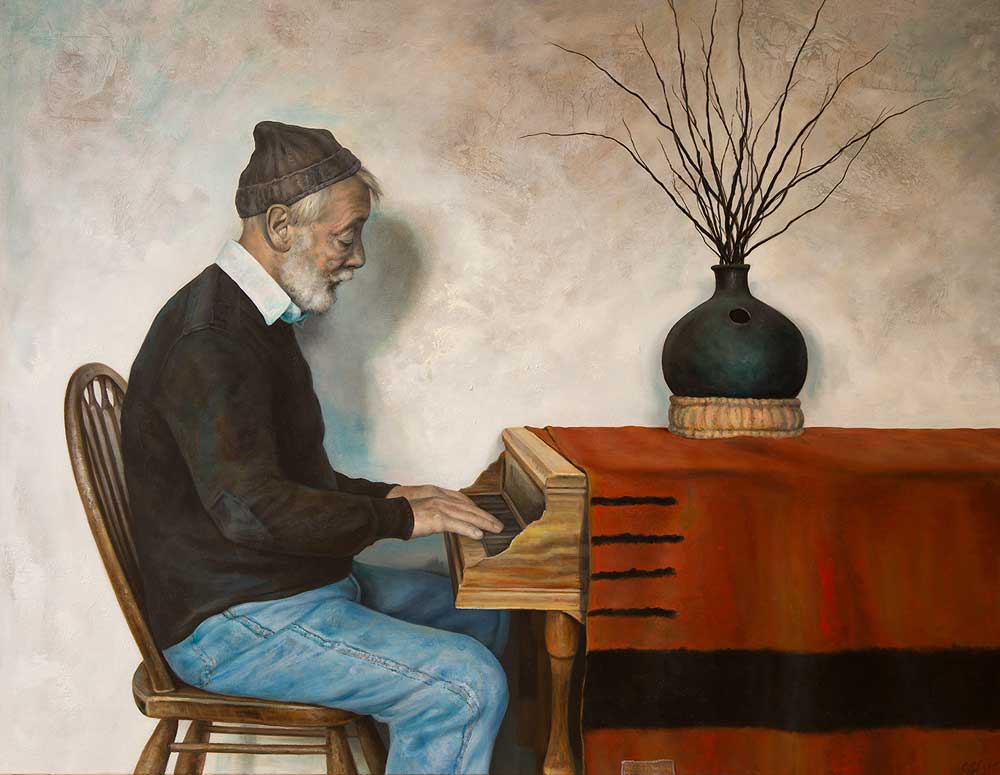 I don’t know why a particular face fascinates me. When Colin plays his harpsichord any concern with the physical world drains from his features and his face reminds me of something I might see perched in the arches of a basilica, a biblical face. I have known Colin for years like I have known this expression for years and I became fascinated with it, perhaps because it evoked something in my memory?

When I began this composition I had recently purchased an old red and black Hudson’s Bay blanket. Someone had washed it improperly, probably threw it in a dryer, and the edges had frayed and it was tattered – I became infatuated with this too. And so it became a prop, and the composition of Colin became just as much an arrangement of reds and blacks as it did a portrait of a dear friend. The blanket’s horizontal lines invigorated the scene slashing across the canvas, and suggested the orderly lines of sheet music present only in Colin’s imagination. (Generally, Colin plays with the lid open, but this time, with the blanket thrown over the top, he joked that, perhaps, his harpsichord had a cold.)
Fracturing this human order are the disjointed sticks rising from the vase. They are organic, and somehow conscious, moving with, or in relation to, the music, and suggest to me the silhouettes of bare maple trees during a deep Ontario winter where I grew up. A season in contrast with the vase, but I am wrong, it is actually a cooking vessel, oddly also a musical instrument, from Owerri, Nigeria, used by a woman. With her breath, her hands, and a series of holes, she can produce a percussive sound as background for singing and dancing. And so it is as they say: music is life.

Joe Coffey grew up in Caledon, Ontario, at the time a rural enclave outside of Toronto where his family farmed. Although no longer religious, Joe was raised Catholic, and an alchemical fusion of the theatrical ritual, music, and visceral friezes and statuettes form the foundation of his work. He felt like a voyeur as the rituals unfolded and identified his own emotions in the expressions of the sculptures around him. Joe’s subjects embody this sculptured expressiveness, yet are also fixed in a narrative or theatrical moment and the tension between stillness and movement creates a dialogue between painting and viewer: why this moment? What came before? After? The viewer is an intimate voyeur to the scene and must navigate this tension. Today, Joe resides in Victoria, BC, and he has been an exhibiting artist for the past eighteen years.