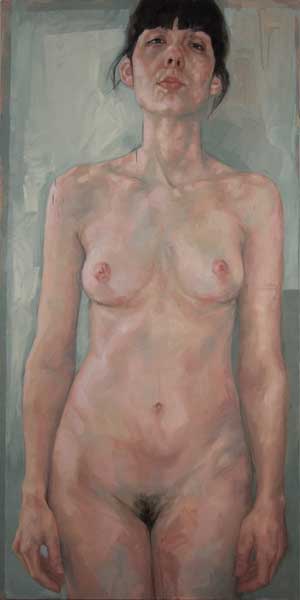 Directed by an interest in how preconceived notions of gender and sexuality shape the act of looking, my paintings are an investigation into how the individual subject performs their gender without the aid of clothing. I don’t want to paint someone dressed in a certain way, then it would be about fashion, subcultures, narrative. My paintings are nudes of myself, friends, and family. I am interested in questioning what is appropriate in terms of nudity. Who is allowed to see who naked and why? When clothing is removed and one is left with only their skin how is identity constructed or performed? Presented with a nude figure the viewer must acknowledge and navigate their inherent assumptions, desires, and stereotypes. Through the questioning of accepted norms the work becomes an investigation of difference. By exploring exactly what, if anything, can be deduced about gender and sexuality from an unclothed body, I hope to make apparent the scope of representation possible within the seemingly narrow field of gender binaries.