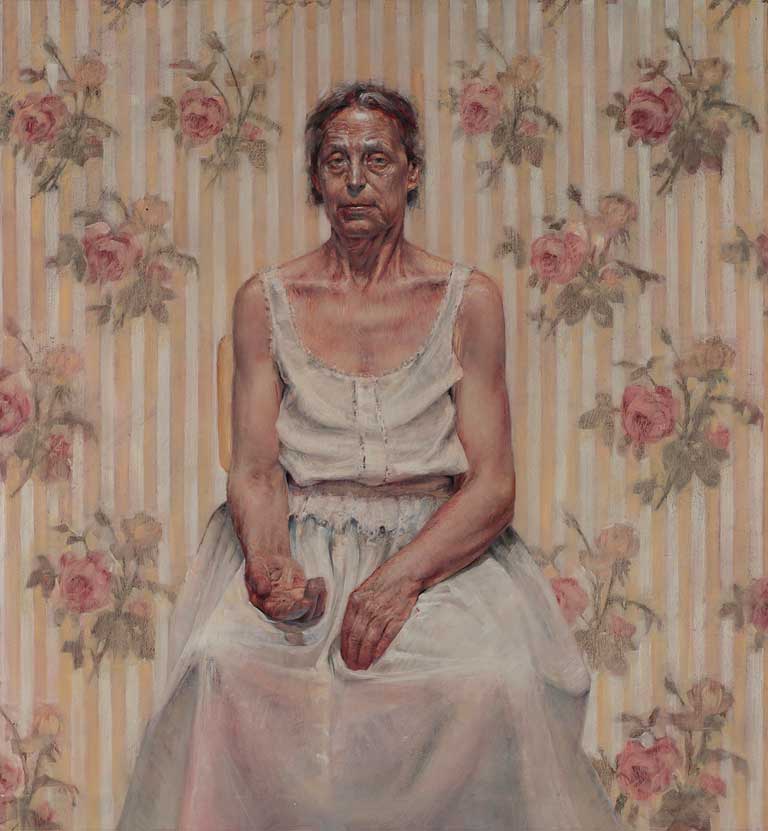 In general, I have an enduring interest in bridging the gaps that exist between abstraction and realism, art and craft, decoration and design, the classical and the contemporary, and the theoretical and the personal. These dichotomies have always seemed overstated, and more symbiotic than antagonistic to me (though I realize they are symbiotic via their antagonism). I strive to articulate and resolve these “oppositions” in all of my work; and although I have a more personal attachment to this portrait, it is no exception.

This is my baba (baba: Ukrainian for grandmother). She was, and is, a tough woman; but as with so many people bearing a curmudgeonly demeanor she had a very gentle manner that she would share with a select few. My experience with my baba was not the abusive and alienating one experienced by the majority of people with whom she came in contact. My relationship with her was always caring and compassionate. With the passing of time, her cold exterior crumbled dramatically with the onset of dementia and, unhindered by faculties of which she is no longer in control, a much more fragile and vulnerable person now reveals itself sporadically. My baba is nearing the end of her life. She lives in a home with full-time care and is dependant upon those she was once cruel to as well as those she showed affection to for emotional attention. She continues what I have always viewed her life to be: a very lonely existence. Subjectively this pains me a great deal; objectively, it serves as a clichéd reminder that we all may very well reap what we sow.

The pathos in this work is intentional, however it is not sentimentality I am interested in. I see no mutually exclusive relationship between sentimentality and theoretical solidity, and I wish the latter to temper the former. The woman in this picture is not my baba; she is a person who re-presents my baba and all that she, and her life, has come to represent to me. The decorative background is very similar to what my baba’s home may have looked like in the 1950’s: a period which she has referred to as the happiest of her life. My baba is now 93, but perhaps more importantly, she still lives in her 40’s; as this is the period most commonly manifested in her hallucinations and deliriums. Her pose is the traditional pose of a ‘Last Judgment’ painting (the left hand turned down and the right hand turned up: a ‘weighing of souls’ or ‘sins’). After a life of judgment that excluded and condemned many, my baba now lives in perpetual judgment as others are in absolute control of the life that is no longer her own. And perhaps, she has had judgment passed on her from a higher power as well (if one believes in that sort of thing; and while I do not, she certainly did).