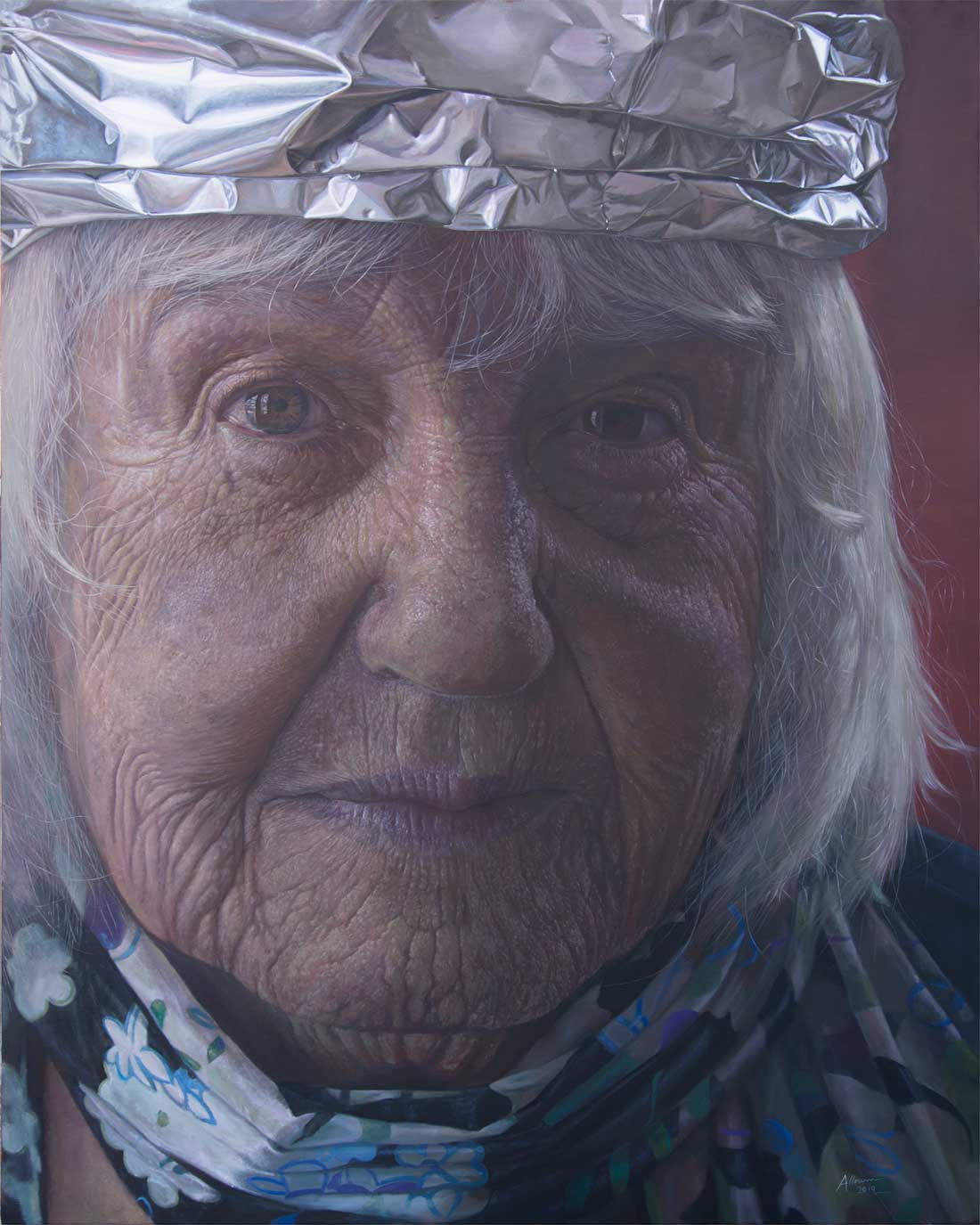 When the challenges of a new language fail to communicate to the required depth, we rely on sensory perception to compensate in an attempt to understand each other. My recent arrival in Canada exposed me to new places, new faces and new colours. A desire to capture my past and these new experiences formed the basis of my new collection of art called “Reflections”.

“Reflections” is an attempt to dive into and explore my sensory awareness that is a result of personal experiences and experiences of others shared with me in our desire to connect despite the barriers. Realism alone does not fulfill the artistic vision of my work. Through this collection I seek to embody the soul of the person hidden beneath the eyes and facial features.

“Joyce” is a portrait that mixes wisdom and spontaneity. This spontaneity is revealed in her smile and her experiences and memories in the curves and folds of the tinfoil crown. As you contemplate the work, details and depth are uncovered just as they are in our relationships with those around us.

Houssam Alloum was born in 1986 in a village in the mountains of Sweida, in southern Syria. He became well known at school for his interest in painting and sculpture and subsequently earned a B.A. in Fine Arts from Damascus University in 2011.

Due to tremendous unrest in Syria, Houssam fled to Jordan in 2013. There, he took part in an exhibition entitled “Eradicate Guns From Your Life”, an exhibition that focused on the distressing situation in Syria. He also performed volunteer work and conducted art therapy workshops for Syrian refugee children who had sustained both physical and psychological trauma.

In 2014, he moved to Istanbul, Turkey where he took part in a monumental painting project. The painting blanketed 450 square metres, and was adorned with the names of the 12,490 Syrian children who were victims of the Syrian conflicts up to that point in time. In 2015, while exploring Expressionism and in reaction to the war, he painted a series of portraits that reflected his experiences and relationships. He also began to paint in the style of Realism and Hyper-realism to examine the lives and the emotional damage of the people of his homeland. His haunting, sorrowful portrait of a Syrian woman, entitled “The Syrian Lisa”, through social media, has become one of the most famous symbols of the effects of the abuse occurring in the Syrian Revolution.

In September 2018, Houssam moved to Gananoque, Ontario, Canada with his wife and child, and brought along some 60 canvasses in various stages of completion. Houssam’s work has been shown in Dubai, Germany, The Netherlands and Canada.