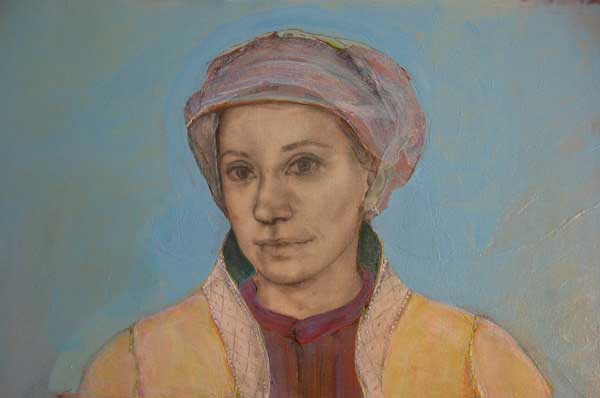 Keeping Watch is a self portrait in a series of paintings over the last five years of my women artist friends depicted as icons or indices. I don’t think of these pictures purely as portraits, which is somewhat evident in the fact that the bodies and faces are hybrids. The specificity of the faces is important; I like that which is particular, exacting and ineffably communicative. The more precise and seemingly anachronistic my choices are, with respect to the Holbein costumes I’ve borrowed, or the colour field painting techniques employed in the negative space, or the art historical significance of the gaze – the more it seems questionable that one can ever know who it is we think we see. The movement between self documentation and social critique is rooted in the power of materiality, the heavy investment in the subject, and the understanding that what is real is often preferably, and beautifully unreal.