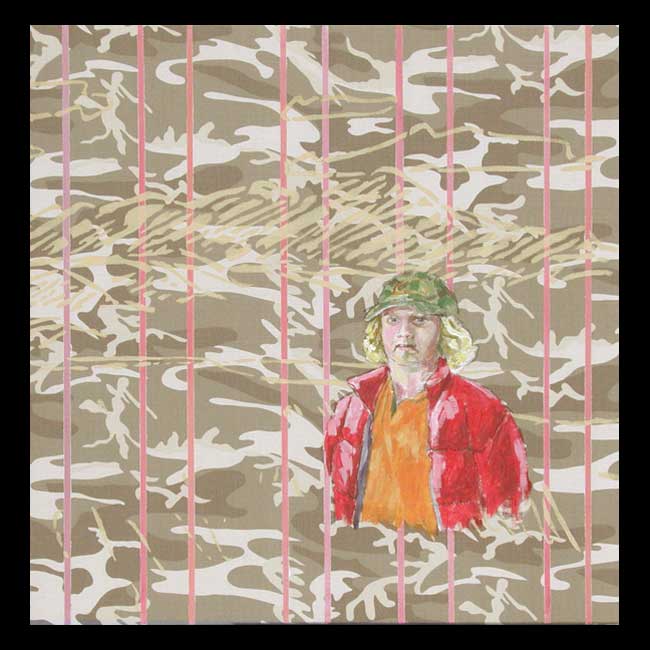 Owen in Red Jacket – This is a portrait of Owen Darrah – a ten year old boy and my son – wearing his down-filled jacket and camouflage hat. Besides an attempt to capture Owen at a particular moment in his life, this painting is also an attempt to document some of the cultural tendencies and events that are ever present in his life. These cultural tendencies include a somewhat paradoxical relationship with the environment – the actual Canadian landscape and the media driven construct of nature, a symptom of which is manifest in the move of camouflage to replace plaid as the ubiquitous fabric pattern (and the stenciled image of a mountain scene in the background). Even the combination of a rendered portrait on an abstract ground so that they are both integrated and disjointed speaks to this paradoxical relationship.

While I initially approached using camouflage to speak about the disconnect between nature and how it is represented in media (the main focus of most of my work) I can not avoid the fact that Owen is growing up during a time that Canada is at war and that camouflage has a military significance. Something that frightens me much more than it does him.

Like many ten year-olds, Owen is equally comfortable back country camping and downloading software onto the computer. Owen in Red Jacket shows a ten-year old who is growing up with feet firmly planted in both the natural and media saturated world.