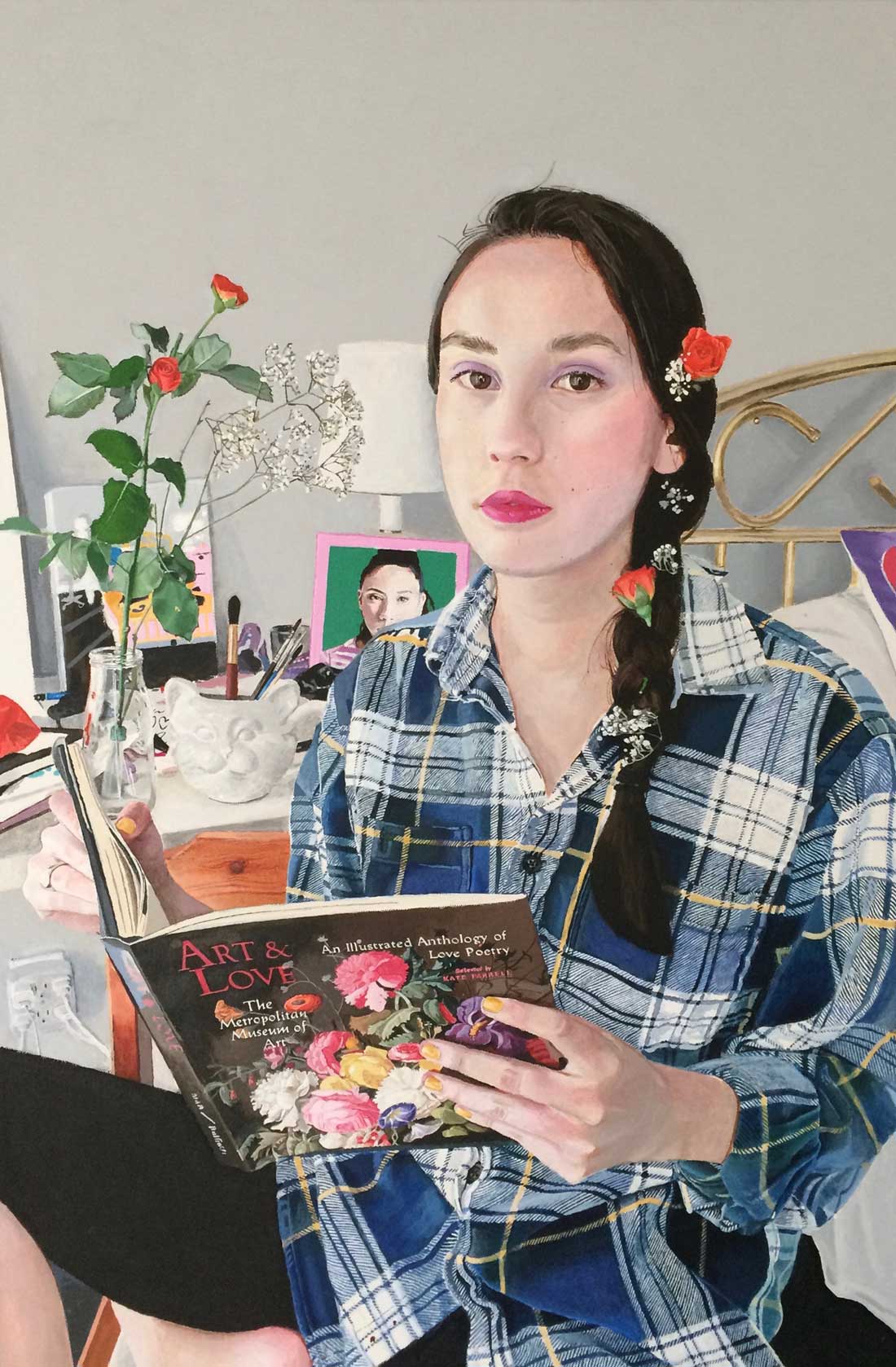 Home: Toronto, ON
Title: I like the idea of romantic thoughts, but I’m just not that poetic of a person
Media: Acrylic on stretched canvas
Dimensions: 91 x 60 cm
Website: www.atleighhomma.com

As a person of mixed-race, my work is concerned with identity and how my presentation informs the behaviour of those around me. In I like the idea of romantic thoughts, but I’m just not that poetic of a person, I consider the relationship between the artist and muse. Occupying both positions, I inhabit the role of an innocent young woman disinterestedly educating herself on poetry. Parodying masculine topes from art history, the portrait mixes Renaissance aesthetic, Modern themes, and Contemporary plasticity. The painting itself, rendered in acrylic, is compositionally balanced through flat monotone planes and bright pops of highly rendered colour that give the work a strange tension, emphasized by the central figure’s confrontational gaze, leveled at the viewer in perpetuity.

Atleigh Homma is a multi-disciplinary artist working in Toronto. She completed her BFA in Drawing and Painting from OCAD University in 2016 where she was the recipient of the John Madott Fine Art Award. She has been a member of the new-media artist collective Tough Guy Mountain since 2014, performing for galleries and events such as the AGO, the Power Plant, Art Toronto, and Nuit Blanche. Independently Atleigh has been working on a performative YouTube project entitled The Joy of Atleigh, in which she juxtaposes hyper-feminine beauty-guru culture with the extremely masculine intellectualism of the art world. In November of 2018, Atleigh had her first solo show If I’ve Been Enveloped in Tenderness, which dealt with the appropriative nature of image making in the 21st century as well as her experience as a half-Japanese woman.

Solo Exhibitions
2018 – If I’ve Been Enveloped in Tenderness, The Brandscape, Toronto ON
2017 – The Joy of Atleigh, Bookcase Micromuseum and Library, Western University, London ON
2016 – Review of Gouache, Xpace External Space, Toronto ON