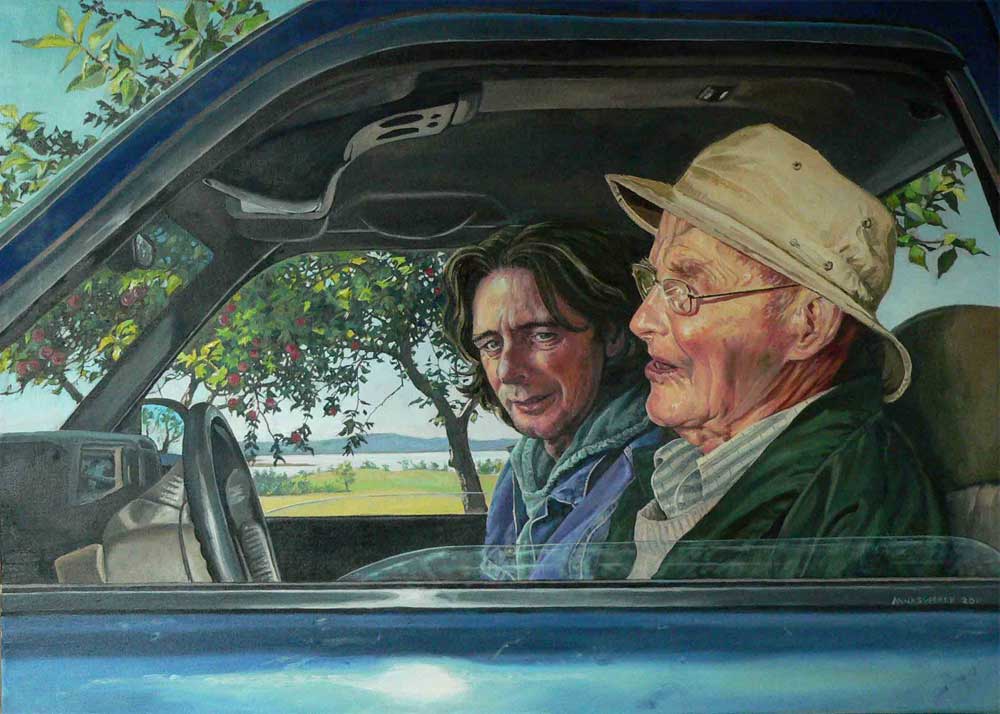 This father and son portrait is from a collection of art work planned for an exhibit in 2012 called ‘Chi Mi Bhuam’- ‘I Can See Far Off Yonder’ This exhibition will be the second in a series I call “Old New Scotland” –works that best decribe my relationship with the land and people that I have lived amongst since moving to Antigonish, Nova Scotia some 40 years ago. I came to a culture and landscape largely created by a group of exiles and immigrants who, over 200 years ago, transplanted their customs and culture to a new land. As a young art student arriving from suburban Ontario, this Scottish Highland culture–still intact, strong, and vibrant–was very new to me and has profoundly affected the way I look at the landscape around me.

The exhibition explores in visual form the sense of connection that 19th Century Scottish immigrants to Nova Scotia felt for the landscapes they had left behind in the Scottish Highlands, and their gradual and increasing attachment to the landscapes of “New Scotland.” This attachment is at once poetic, as attested in traditional songs and stories, and also very practical, for their existence depended on their ability to eke a livelihood out of the often unforgiving lands they settled.

Gerard and Joe Jack Will Chisholm are my neighbours, and the landscape in the window of the truck has been farmed by their family for six generations.

In 2005, I had a major travelling exhibition of drawings, etchings, oils and watercolour paintings entitled “Old New Scotland”- the first in this series. The show was exhibited in the Inverness Art Centre and St. Francis Xavier University Art Gallery, and traveled to Scotland where it was displayed in four venues in areas associated with the immigration to Nova Scotia in the 19th Century.

OTHER INFORMATION:
Initiated the printmaking studio at St.F.X.University, organized a local printmakers group and was a founding member and past president of the Nova Scotia Printmakers Association.