The Founders | Kaaren and Julian Brown

The Kingston Prize was founded by Kaaren and Julian Brown, who first settled in Kingston in1962. Inspired by the exciting and controversial Archibald Prize, held annually in Sydney, Australia since 1921, the couple saw the need for a national portrait competition in Canada. Having lived in Sydney in the late 1960s they were reminded of the huge public interest in the Archibald and wanted to create the same momentum closer to home.

After several visits to Australia for family events in the 1990s, the Browns became intrigued with the idea of a prize for contemporary portraits in Canada and began to explore the possibilities. The first competition was organized and held in 2005. The Browns donated the prize money that year. The event was named The Kingston Prize in honour of the city where they had raised their family.

At the heart of their vision, the exhibition travels cross-country, as a means to share and present contemporary portraits from an evolving creative tradition. Julian and Kaaren believe in the power of portraits to create a national community spirit through this visual and cultural dialogue.

The Browns continued to organize the ever-growing bi-annual competition until 2019. They retired in 2021, remaining advisors and an inspiration to The Kingston Prize going forward. 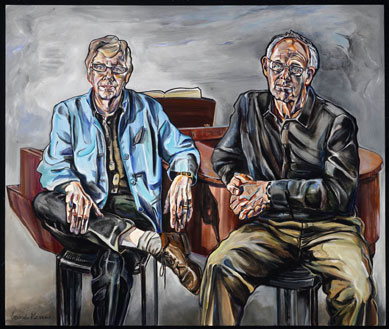